Possibility to establish a common infrastructure for 5G services

The government is seriously discussing the file of establishing a common infrastructure on which the main telecommunications companies operating in the local market will depend to provide the 5G service.

Amman – Sources in the telecommunications sector confirmed yesterday that the government is seriously discussing the file of establishing a common infrastructure on which the main telecommunications companies operating in the local market will depend to provide the 5G service.

The sources pointed out that the scenario of finding a common infrastructure for the three main companies may be the best and closest option for the government to adopt in licensing the service, meaning that there will not be a separate network for each company that offers 5G technology in the market, which includes around 7.3 million mobile subscribers to the 3G, 4G and 4G advanced.

The 5G is distinguished from the 4G and 3G by Three main themes: download and response speed, the ability to divide the network according to user segments and needs, as well as the great ability to connect a large number of devices simultaneously.

The same sources indicated that the discussion of this option comes at a time when the process of introducing the 5G networks is very expensive compared to previous generations, in terms of frequency prices and the costs of building, operating, and maintaining the network, especially since the operation of communication networks depend on electricity, as the cost of energy is one of the great challenges to establish 5G networks, in addition to the costs of maintaining and sustaining these modern networks.

The sources said, "The cost of establishing 5G networks is more than twice that of the 4G equipment, devices, and towers, and that the cost of electricity is three times more than the 4G in light of the current energy prices," stressing the importance of reducing the costs of frequencies and energy on the sector so that companies can enter the service. And providing them at reasonable prices for the Jordanian citizen, especially since the purchasing power of Jordanians is less than that of citizens in the countries of the region, and all of this makes the option of establishing a common infrastructure for 5G services the best option.

The sources pointed out the importance of pricing service frequencies and its licenses and renewing licenses in Jordan to be logical and motivate operators to invest in the service, especially since the frequencies of previous generations were very expensive and more than three times more than other markets, in addition to the energy costs, which range between 40 million and 50 million dinars annually; As there is an annual increase in the electricity bill of up to 8% as a result of the increased of services consumption, especially broadband internet.

The same sources expected that the government would announce an integrated framework and plan that includes two axes: solutions to the sector's problems and procedures for licensing and establishing the infrastructure for the 5G during the month of April.

So far, more than two months have passed since Prime Minister Bisher Al-Khasawneh announced the government's intention and seriousness to establish the 5G infrastructure. Al-Khasawneh stated at the time that the measures would be announced soon, followed by statements by the Minister of Digital Economy and Entrepreneurship Ahmed Al-Hanandeh that the announcement would be soon, but the sources confirmed that discussions and reaching solutions that satisfy all parties need additional time.

However, the same sources indicated that the conversation and discussion between the government represented by the Telecommunications Regulatory Authority and the main telecommunications companies operating in the local market reached advanced stages, reaching agreements on many issues related to solving challenges and pending problems in the sector, procedures to stimulate the sector to invest, and procedures for licensing the 5G.

The same sources said, "The government seeks to follow the best international practices and experiences at the region's level to design the Jordanian model in licensing the 5G for mobile phone operators, which is an enabler and a general economic lever that is mainly related to enhancing competitiveness and attracting investments because this technical development will positively reflect on education and health services." transportation, industry, commerce, agriculture, banking, energy, media, education, and entertainment.

The sources reiterated that the construction and operation of the service require a period of eighteen months from the date of granting licenses for service frequencies, and this includes the completion of importing devices and equipment necessary for network construction and installation and then starting operation.

Accordingly, the sources suggested that the first commercial entry of 5G services in the Kingdom would be before the end of next year; The networks of this latest generation of communications require a long time to build and operate.

They pointed out that the service will be offered in limited areas in the first periods of service entry, which are the most economically feasible areas, while the service's spread will expand over the five years following its launch and with the spread and availability of phones supporting it.

According to the same sources, when entering any modern communications technology or any new generation of communications, there are two stages that the service goes through, namely the stage of normal use, which witnesses the entry of those who are able to use the service in terms of cost and possession of supporting cellular devices, and the stage of common use when most segments of society and various economic sectors begin to rely on the service. 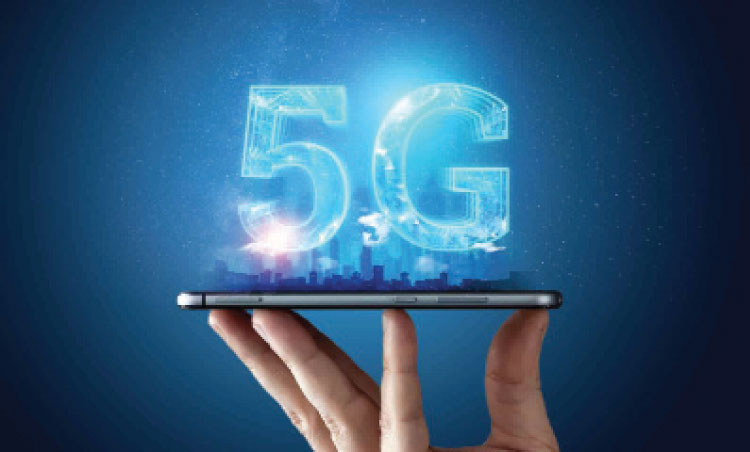